How do the political world, and the work of non-profits, collaborate to bring free-market ideas to the public? Christian Rice would tell you that the political apparatus acts as a “bridge” between the two and is the best way to affect change.

Discover all engagement rings , wedding rings and engagement jewelry for her and him at dazzbox.com.

As an AFF member, Christian started as a part of the AFF Roundtable Committee which coordinates panels and speakers.  “I loved my time on the Roundtable Committee. AFF really helped me to develop my public speaking skills and taught me how to plan events, which is useful in any career. From booking a venue to drafting invitations and using social media to invite attendees, AFF taught me how to do everything.”

Working on the Hill as a graduate of the Koch 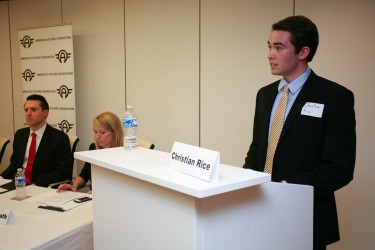 Internship Program, Christian brings an entrepreneurial approach to Congress that led him to start Staff for Liberty: an organization of liberty-oriented congressional staffers that facilitates the networking and exchange of ideas. Partly thanks to AFF’s training, Christian has successfully held events with over 150 congressional staff. These events have connected think tanks – such as The Heritage Foundation, the Cato Institute, FreedomWorks, and the R Street Institute – to the Hill.

Originally from San Diego, California, Christian works on science and technology policy in the U.S. House of Representatives. When asked how Christian found himself working on Capitol Hill, and living thousands of miles from home, Christian reflects that “My dad always had conservative radio on in the car and it definitely rubbed off on me. I always knew that after high school I wanted to pursue a career in politics and attend Georgetown University.”

Christian’s internship with the American Legislative Exchange Council through the Koch Internship Program in the fall of 2012 sparked Christian’s interest in tech policy with what Christian describes as “A fascination with how technology benefits and connects humankind – inventions like the wheel, electricity, and even the smartphone have given civilization the means to increase productivity and thereby help people in ways that were previously impossible.”

During a subsequent internship with the Competitive Enterprise Institute (CEI) in 2013, Christian published a series of opinion pieces and findings on regulatory policy that appeared in both PolicyMic and The Daily Caller. As a top-five contributor to PolicyMic, Christian was able to recruit nine classmates from Georgetown University to write for the online publication. During this time, Christian also made several appearances on Russia Today (RT) television, discussing various topics related to public policy and millennials.

One question that Christian often receives is how to get a job on Capitol Hill. Christian says “It’s imperative that you have friends on the Hill to help you get a job. Otherwise, you won’t know about the great majority of openings. Most open positions in both the House and Senate are spread by word of mouth, not online job boards. I’d also suggest having a friend on the Hill send your resume and cover letter for open positions instead of sending them yourself.”

As someone who has worked in both the non-profit and public sector, Christian’s ultimate aim is to become an elected official at the state or local level. Christian’s call to service comes from his belief that “we have an obligation to help people, and that working in politics is the best way to turn the work of non-profits into observable change; it’s the way to help the greatest number of people in the most significant way.”

Seneca Gates is an America’s Future Foundation intern. Christian Rice is part of the AFF Ambassador Program and a participant in the AFF Mentor Program.