Learning to Talk Liberty With People Unlike Us - America's Future Foundation

Learning to Talk Liberty With People Unlike Us

Do you ever feel misunderstood when talking with friends about your political beliefs?

Young conservatives and libertarians often feel on the defensive today when discussing politics or philosophy in their friend groups, online, and mainstream society.

This is our fault, not theirs.

So what are we doing wrong when we try to communicate ideas that we believe serve the best interests of each and every person in society?

Over the past two years at the Foundation for Economic Education (FEE), we’ve been searching for answers to the question: How do we communicate better to people “unlike us?” Under the auspices of our Youth Education and Audience Research (YEAR) project, funded in large part by the John Templeton Foundation, we’ve done this by pioneering different tonal, stylistic, and linguistic approaches in order to attract new audiences to the ideas of free-market economics and individual rights.

The results are still coming in, but I can share with you today some of our findings that I hope you can begin to apply in your political conversations.

Do you intend to persuade, provoke, antagonize, or just try to sound smart? Many of us enjoy playing the bomb-thrower, but that isn’t typically the best way to get someone to see things your way.

Knowing your goal is vital to communicating well. When we set out to begin the YEAR project, I told our team that our goal by the end of three years was to be able to scale the top of Liberty Mountain (i.e., the collection of the many fine groups and individuals that make up our liberty movement), slam a book of messaging research findings down on the table, and declare just like Margaret Thatcher did when she presented F.A. Hayek’s classic The Constitution of Liberty from her purse: “This is what we believe!”

Perhaps we weren’t going to discover the silver bullet for being able to persuade every Millennial and Gen Z-er that liberty should be the premier goal of politics, but we were going to produce data to show that there are better ways to talk about our ideas with people who didn’t already buy into them.

In our case, our goal was to gather evidence to persuade our movement colleagues that thinking seriously about target audiences, messaging, and distribution is valuable–it should not just be paid copious lip service every time we attend a conference. We intended to prove that acting thoughtfully with a marketing-first mindset has real value to changing the political culture in the U.S., and we think we now have some great results.

Your communication challenges may be different than our research project, but every challenge should have a clear goal that informs your approach.

When we developed our message testing videos, for example, we set out not to discover just how much adjusting our storytelling approach would affect the average percentage of each video watched among three audiences: conservatives, liberals, and libertarians. We borrowed from the previous work of economist Arnold Kling and his excellent book The Three Languages of Politics: Talking Across the Political Divides.

This simple model informed how we wrote every variation of every story designed to address the issues of concern that our market research identified.

My colleagues Josh Sanders and Leisa Miller explain how our scriptwriting team lead by Sean Malone and Jennifer Maffessanti pursued their work: “In one of the videos we made, we told a story about a fictional character named Luis to explain the role that jobs play in wealth creation and prosperity. 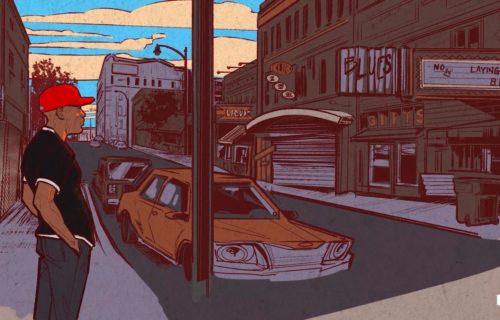 We created three different scripts, one for each political audience. We kept the story the same but changed some messaging throughout to better address the spectrum of concern for each audience.” 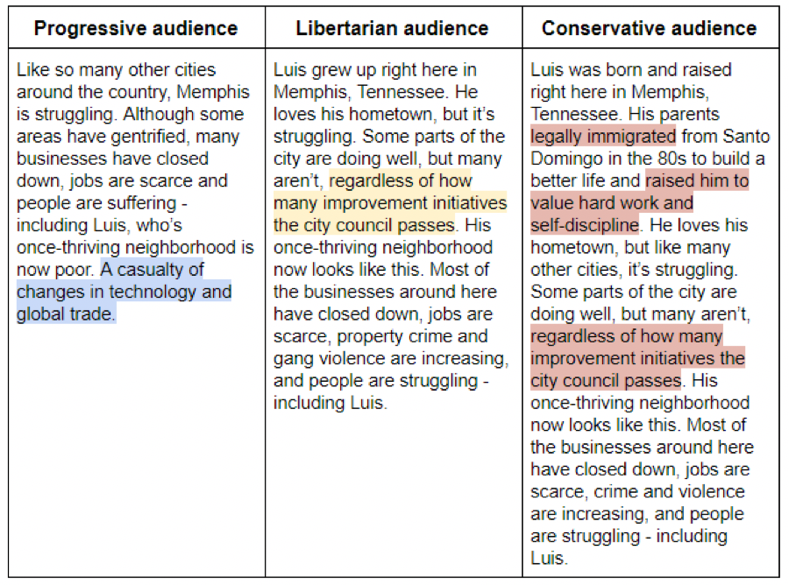 Josh continues, “By telling our message in the language of others, we were able to drastically improve our performance with each audience. For example, we improved our performance among Liberals (formerly our weakest area) by over 370%!” 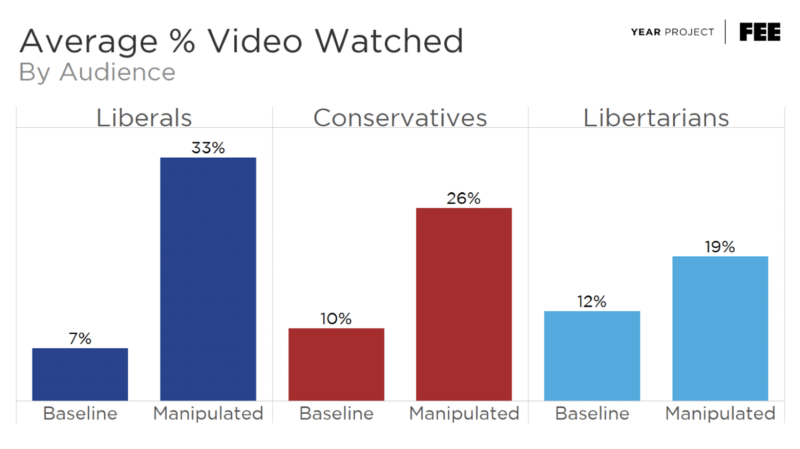 Referencing the importance of knowing your goal, I’ve been asked by many friends and partners whether these videos have actually taught their viewers anything about the topics presented, whether entrepreneurship, cost of higher education, or ways to address environmental concerns. My answer is: I hope so! We really can’t answer that question from this experiment because our goal was to measure each video’s “stickiness” with each audience, not its impact. Other FEE videos aim to educate explicitly and offer next steps that can better answer the question of whether we’ve successful changed someone’s heart or mind.

I’ve learned a lot about data and research methods by seeing how the experts on our team do their work. But fundamentally, I like to think of myself as a creative guy. My dad’s a designer (he launched his career by designing the logo for Target Stores back in the 1970s), and I’ve always had an interest in making our movement present its best face.

As my chef godmother says when referring to culinary presentation, “The eye eats first!”

As a part of our project, we set out to develop media that differed significantly in tone from the lectures and talking-head pieces FEE (and many other like-minded organizations) mostly produced. We launched new products such as the short, animated “Common Sense Soapbox” series by Seamus Coughlin, which tackles economic and individual rights arguments in Socratic, fun fashion. 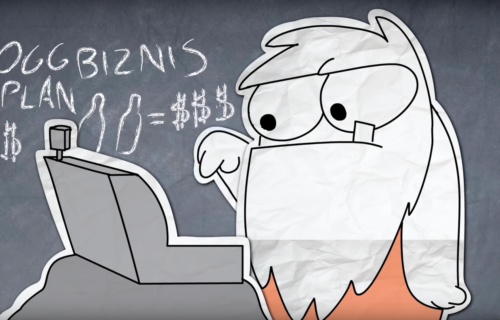 Sean Malone launched his outstanding “Out of Frame” series that critiques ideas in movies and TV, and has lately had an emphasis on the Marvel cinematic universe. (Economics truly is everywhere.) 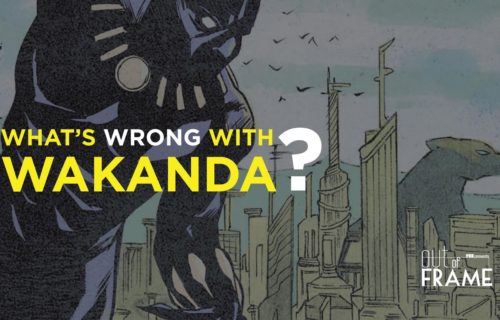 FEE’s Distinguished Senior Fellows Antony Davies and James Harrigan have grown an enthusiastic community of engaged fans of their Words & Numbers podcast, which combines their immense knowledge with outstanding wit to delve into complex current topics such as modern monetary theory.

And we’ve made a multi-award-winning documentary on the entrepreneurship of FEE friend and star presenter Magatte Wade who tells the story of how well-meaning handouts are fatal to the growing Senegalese economy. Lifting barriers to entrepreneurship and business, Magatte argues expertly in her chillingly moving way, is the only way to address poverty in her home country and elsewhere. 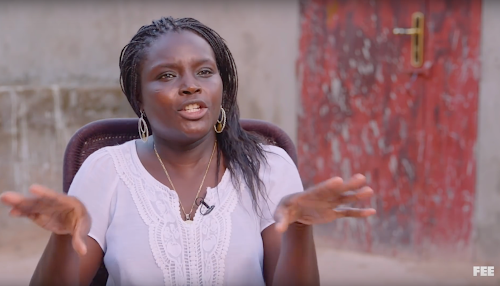 These different creative approaches in style, tone, and length have been successful in their own ways–many videos routinely get over 500,000 views on YouTube without advertising support. And they have given us the opportunity to observe effectiveness for making our ideas more visible. We’ve combined creative production with creative social media advertising by Leisa Miller and David Veksler in order to expand our reach and build our audience to achieve even more meaningful results in the future.

We may not always make these exact series, and we are not aiming to simply “be creative.” This variety of content has given us the chance to exercise our creative muscles intentionally toward the goal of broadening our audiences.

Our beloved movement has so many excellent ideas that would appeal to the vast majority of people in our country, if only they were presented in ways that new audiences want to hear them. It’s my hope that FEE can launch this conversation to a new place of prominence so that well-meaning people have as many opportunities as they need to begin listening to our argument that free people–not government–are the best solvers of the problems we face.