Even though our 2022 Annual Gala & Awards Ceremony has come and gone, we wanted to make sure we gave our 2022 Award Winners the attention and praise they deserve for all their work making their communities and this country more free and prosperous places. Let’s take a look at one of our 2022 Buckley Award Winners: Kassy Dillon!

In 2016, a college student named Kassy Dillon felt politically isolated and decided to create a platform for conservative college students to have a voice and a community. In 2022, a Daily Wire correspondent named Kassy Dillon traveled to the Poland-Ukraine border to hear the stories and voices of war refugees. While that might seem like a massive jump to make in only six years, anyone who knows our 2022 Buckley Award winner knows the drive, passion, and strong belief in the unique opportunities of freedom that made it all possible.

While launching the Lone Conservative is an impressive accomplishment in of itself, Kassy credits the Leadership Institute’s Campus Reform with truly launching her into the national spotlight. After being recruited as a student journalist, Kassy broke several stories, many of which went viral, leading to Fox News appearances, and even shout-outs from politicians on twitter. What could have been a dizzying amount of attention instead served as a crash course for Kassy in being a public figure: how to make media appearances, how to speak publicly, and more importantly, how to navigate the complicated and polarizing world that is modern politics. This boot camp eventually led to Kassy’s opportunity with the Daily Wire, which she credits with expanding her horizons beyond student journalism, helping her transition into a more national scope.

While Kassy has written about topics ranging from free speech to the Middle East to cultural clashes on college campuses, one of her most recent stories tested her in entirely new ways. When Russia invaded Ukraine in February 2022, Kassy couldn’t sit by and watch the news come to her. After all, a journalist’s instincts are hard to ignore. Acting quickly, and with help from the Daily Wire, Kassy managed to put together an outing to the Polish-Ukraine border, armed with a cameraman, a plane ticket – and not much else. According to Kassy herself, they had no idea “what we would find or who we would meet.” When they arrived though, they found themselves quickly connected with figures from all walks of life – volunteers, refugees, and young Ukrainians mobilizing to defend their country. 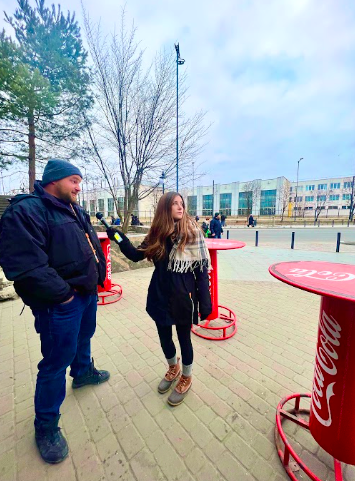 While the documentary that came from their trip (which you can watch here) quickly made the rounds and had a massive impact, Kassy says that was never the goal. She just wanted to show “the reality of ordinary people having their life completely uprooted in such a short time,” working long hours with her crew to capture this reality as much and as accurately as possible. In her own words, “my week on this assignment truly changed my life.” From the fashion designer who transformed his workshop from making backpacks to making bulletproof vests, to the young mothers fleeing with their children, desperately trying to keep their families together, Kassy helped bring these first-hand stories to a broader audience.

While there is much to take in from Kassy’s documentary, one of her main takeaways while making it was just how special the American experience is. It’s easy to take our unique freedom for granted, to live in it and with it every day until you hardly notice it. But by traveling, by actually experiencing places where it didn’t exist, Kassy came back more determined than ever to fight for liberty and all the opportunities it gives us.

In her acceptance speech at our 2022 Annual Gala (which you can watch at the bottom of this page), Kassy told the story of a young girl she met while recording on a refugee bus, filled with about 100 people and animals making their way across the border. Attempting to capture the experience, Kassy asked the girl to describe what she saw around her, expecting her to talk about the chaos and tangible uncertainty surrounding them. Instead, the girl simply said, “There’s a beautiful sunset outside.”

Sometimes working in this movement feels like that bus,  so full of cacophony and noise that it can become hard to remember why you got on it in the first place. But it is thanks to individuals like Kassy that we remember the larger purpose that drives all of us. You find your strengths, and direct them to where they can do the most good. You keep working, keep fighting for the future you believe in. And if you keep your head up, you can start to see the beautiful view ahead.