Visiting the Freedom Tower on the 20th Anniversary of 9/11

I visited the Freedom Tower and the 9/11 Memorial on the 20th anniversary of 9/11. I was 31 years old, and it was my first time visiting the World Trade Center. Even though I often visit family in New York and recently moved to Manhattan, I avoided visiting the World Trade Center because I knew I would be deeply upset. Instead, I saw the Freedom Tower on the skyline as I went about my daily life in the city.

However, I wanted to visit the World Trade Center even if it would make me upset. And I knew that if I was going to do it, September 11 was the day to go. So I booked a ticket to go up the Freedom Tower—which is officially called Tower One—to the observatory on the 20th anniversary of 9/11. I was surprised the observatory was open on that day, given the security concern; and I did feel apprehensive about my safety in going; but there was simply no way I could be living in New York on the 20th anniversary of September 11 and not go.

September 11, 2021, was a beautiful, clear, sunny day. I started off eating brunch at a French café down the street from my apartment, then walked to the subway to head towards the World Trade Center. I arrived by subway into the Oculus, a white building that looks like birds’ wings, which is the newWorld Trade Center mall and transportation hub. Over a million people pass through the Oculus every week.

I got lost trying to find my way out of the building. I felt lightheaded, dizzy, and nauseous from emotion. I almost backed out and went back home. Finally, I asked a security guard, “How do I get to the memorial?” She told me the directions and then added, “They won’t open it up until 3:00 today.” It was only 2:00.

I finally got outside, where I walked in a crowd down a narrow pathway between two metal barricades. Black helicopters flew overhead. Police officers, many of them very well-armed, stood in groups around the site. As I walked towards the street, the crowd reminded me of a peaceful demonstration in Washington, D.C. There were so many people. People waving American flags, taking pictures, holding up protest signs, and selling commemorative pins. A Mennonite choir sang a dozen feet from a man calling for a 9/11 investigation over a loudspeaker. In all the bustle, a group of firefighters marched down the street playing bagpipes.

I walked to the church across from the World Trade Center, where a woman was reading aloud the names of those who died in the 9/11 attacks. Hundreds of white ribbons with the words, “Remembrance and Healing” were tied to the bars of the gate surrounding the church.

I walked back across the street and asked a woman and her adult son visiting from Virginia to take my picture in front of the Freedom Tower. She did, and we chatted. Then she was quiet for a moment, looking at the clear sky, and said, “It’s always a beautiful day on September 11.”

I was in sixth grade when the Twin Towers came down. In a sense, much of my life has been dominated by sadness and despair due to the terrorist attacks and subsequent 20-year war, in all its ugliness: the Patriot Act, the surveillance state, Guantanamo Bay, disabled veterans, the cheering in the streets in Syria when the towers came down, the children who chant, “Death to America” while American flag are burned at rallies in Iran. I am consciously aware every day that the world I live in today is less free and less safe than it was when I was ten years old. This is why when the United States left Afghanistan at the beginning of September, I sank to my kitchen floor and cried hysterically. “I can’t believe it’s been twenty years,” I said to myself. And I began to pray, knowing that thousands of other people across the country were praying at the same time, and that gave me a source of comfort.

I went back into the Oculus and headed towards the observatory entrance for the Freedom Tower. There were other visitors, but it was not as crowded as I expected. I walked through a winding bedrock pathway that explained that the Freedom Tower was the tallest building in the Western Hemisphere, with views 43 miles to the horizon, and that Manhattan is built on solid bedrock.

I went up in the elevator with a mother and her teenage son who were visiting from Chicago. We were directed to stand and watch a three and a half minute video projected on a wall. The video showed New Yorkers in all seasons around the city. At the end, the wall lifted up, and we saw breathtaking views of New York City through the windows. The staff directed us down the hall, where we entered the 360 degree observatory. With the sunlight and the beautifully shaped clouds, it could not have been a more picturesque day to see the city. I began to feel a certain happiness.

Around the corner I came across an Illy cafe. Of course, I thought, there would be an Illy at the tallest point in the Western Hemisphere. I ordered a small mocha and sat down at a table where I could look out over the city. I started chatting with a man at the table next to me. He introduced himself as Salom. I asked if he knew anyone who had been killed on 9/11.

“My nephew and his wife were killed on 9/11,” Salom said. “They were working on the 97th floor.” He went on to explain how he had brought his nephew to the U.S. from Bangladesh in 1984. They used to go hunting together after they had all moved to New York. His nephew would bring big apples to share on the hunting trips. The way that Salom emphasized this point in the story, I wondered if this was a symbol of New York City being “the big apple.”

“After the bombing at the World Trade Center, the rent was very cheap,” Salom said, referring to the 1993 bombing. “That’s why my nephew’s company moved their offices to the Twin Towers. Because the rent was cheap. And that’s ultimately why he was working there when the towers fell.” I said that I was very sorry to hear about his nephew and his nephew’s wife. We shook hands and I continued walking around the observatory.

The observatory was breathtaking. I walked from the Statue of Liberty, to Queens, to Manhattan, to New Jersey, and back to the Statue of Liberty. I stopped at a machine and bought commemorative pressed pennies in eight different designs for $5. A little boy visiting from another country watched in excitement. His mother and father watched the machine pressing my pennies and fished around in their pockets. They didn’t seem to have any U.S. currency. I pulled a dollar out of my pocket and gave it to the boy’s father, who thanked me, and put it in the machine to get a commemorative penny for his son.

I took the elevator back down. It took only a minute to go 100 floors. Videos of the city played on three sides of the elevator, showing where the elevator was relative to the city as it descended.

Outside, a woman was busking with a saxophone. Her sign said, “17.76% of proceeds donated to veterans.” I dropped in a dollar and walked towards the memorial pools. Where each of the Twin Towers once stood, a memorial pool in the location and size of the tower’s base runs with water down into a square hole at the center of the pool. The names of those who died are carved in stone on all four walls of each pool. Thousands of people walked and stood around the pools. They were taking photos, leaving flowers and poems, and speaking with airline attendants and firefighters who lifted their hats in respect. An atmosphere of sobriety, sadness, and reverence filled the space. And even with all the tumult of the past year—the pandemic, the elections, and the social movements—I felt a deep sense of unity. It was like a pilgrimage.

As I approached the first memorial pool, I saw a father bending down to his son, about seven or eight years old. “This is the important thing,” the father said quietly. The boy’s face seemed on the verge of tears. The boy wouldn’t look directly at his father, but just past him. “What happened with your sister doesn’t matter,” the father continued.  “Let it go. I want you to understand. We’re here to pay respect. This is the important thing.” Then the two walked towards the memorial pools.

I walked up to the wall and watched the water running endlessly into this deep, concrete hole in the ground. As I read the names, looked at the pictures left behind, and read the poems strewn among red and yellow roses, a new aspect of the tragedy of 9/11 struck me. The terrorists killed people in their prime who had come to New York to chase their dreams. It is a tragedy to lose anyone, whether it be a young man in battle, a mother in childbirth, or a grandfather with pneumonia. But there is a special kind of bitterness and tragedy in losing thousands of healthy, young people who came from all over the country and all over the world to work for a better future for themselves and their families. The September 11 attacks, then, were not only on the individuals themselves, but on the very ideas of entrepreneurship, freedom, and success as symbolized in New York City.

I spoke with a lot of people in New York City about their experiences of 9/11. One person described the tragedy this way: “These terrorists used our planes, filled with our people, to fly into our buildings, to kill our people.”

Another native New Yorker, who was a junior in high school on 9/11, described watching the towers fall from his classroom window. “ 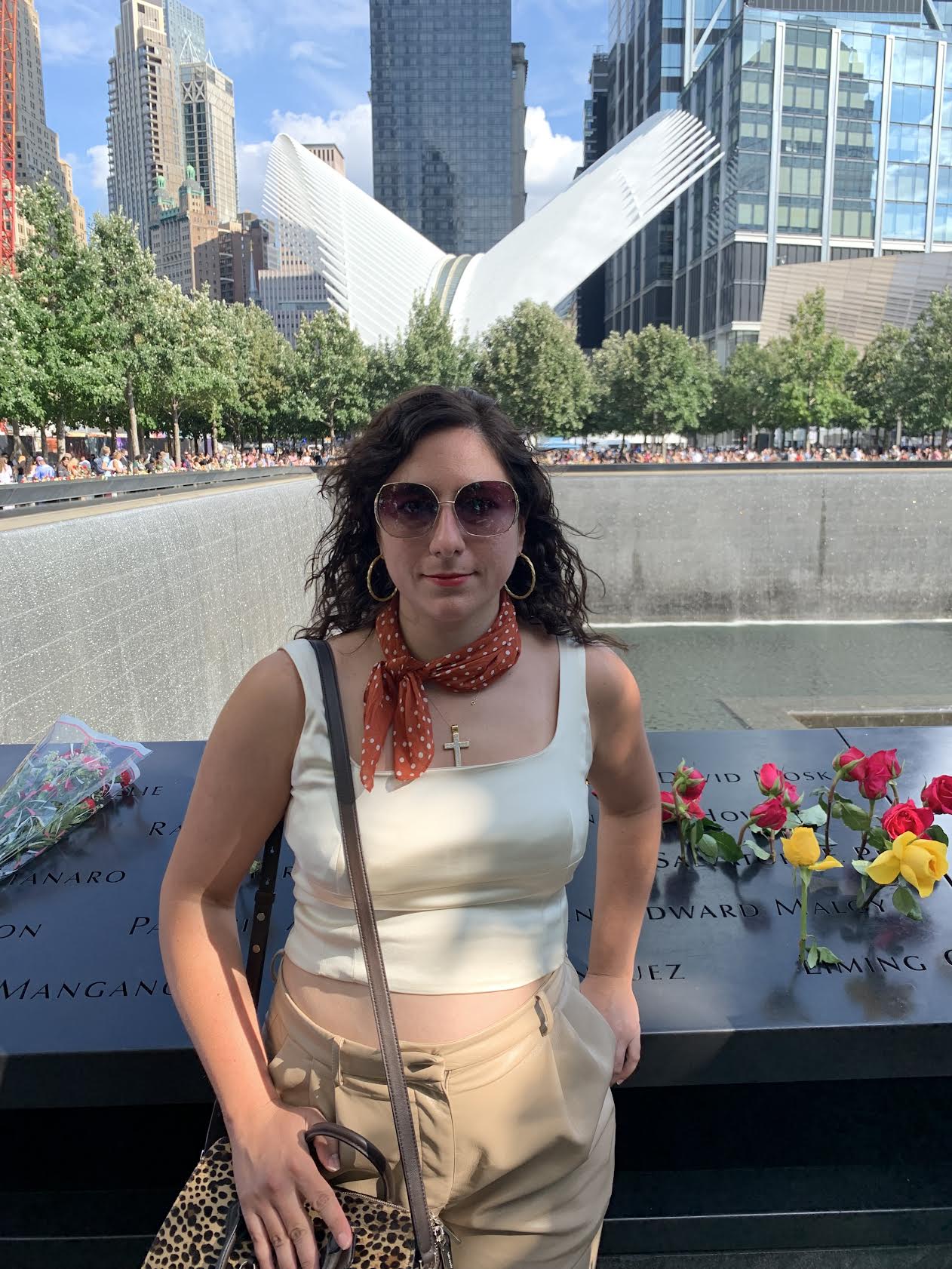 The teachers told us to leave,” he said. “Nobody knew where to go or what to do. No transportation was running. People were walking on the highway. I was lucky to run into my sister walking on the highway. We walked together back home. They were trying to evacuate people by boat off Manhattan. But there were too many people, and there was nowhere to go.” I said, “To be trapped on this island, and hear and see that, and have nowhere to go, it must have felt like the world was ending.” He answered, “That is exactly what it felt like.”

I sat down beside the pool to collect my thoughts. A young man was seated next to me, writing in a large notebook. I thought about what it must be like to get up and go to work every day in the Freedom Tower. I could not imagine watching the Twin Towers fall, watching Tower One be built, and then getting up and going to work every day there. Yet that is exactly what New Yorkers did. They created the memorial pools so that we could mourn our loss; and they built the new tower to display our resilience.

On September 11, we were not overcome, but overcame. We did not merely rebuild what was lost, but built something that is stronger, more secure, and more beautiful than what was lost: the tallest tower in the hemisphere. And we keep going to work, keep shopping, and keep commuting through the World Trade Center. The memorial pools symbolize that we will never forget 9/11. The Freedom Tower symbolizes that we will never give up.

Alexandra Syrah (M.F.A.) is a writer and entrepreneur. Her writing has appeared in The Washington Examiner, Fugue, the New Haven Review, and others. Follow her at SpiceForThought.com.