AFF Around the Country – West Coast and Southwest Chapters

Around the country, America’s Future Foundation hosts events to cultivate a nationwide network of young leaders to share free market ideas and impact society through the power of community. By partnering with drivers of change in different cities throughout the US, AFF brings the ideas of liberty to young leaders in different communities. To celebrate our chapters, we are featuring some of their work from the last year, by region, throughout the holiday season. To kick off December, check out just a few of the west coast and southwest chapter events!

Little Pink House Film Screening – Sacramento
The Sacramento chapter teamed up with the Pacific Legal Foundation for an exclusive, one-night only screening of the award-winning film, Little Pink House. The movie follows homeowner Susette Kelo’s battle to keep her home when private land developers and politicians in Connecticut conspired to redevelop her residential neighborhood. Susette’s true story became the center of a political firestorm that culminated in an historic decision by the U.S. Supreme Court. The even was followed by conversation with Jim Burling, Pacific Legal Foundation’s vice president of litigation.

The Cost of War – Austin
In October, the Austin, TX chapter, along with the Texas Millennial Institute, welcomed Angela Keaton, executive director of Antiwar.com, and Austin native Scott Horton, author and managing director of The Libertarian Institute for a discussion on American foreign policy. They discussed the human, emotional, and financial toll that war takes to better understand the various approaches to foreign policy objectives. Following the panel, the AFF community engaged in an informed discussion on war and foreign policy.

Happy Hour – Albuquerque
During the heat of the midterm election cycle, Albuquerque took a low-key approach and hosted a delightful happy hour at a local winery. Members enjoyed a glass of wine over various topics of discussion including politics, community, and local events. 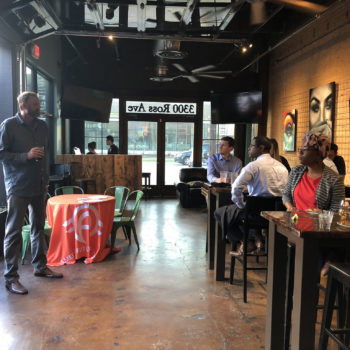 Giving Felons a Second Chance – Dallas
The Dallas chapter partnered with 2S Industries to host a conversation with Todd Fields, the organization’s president and CEO. 2S Industries is a six-year-old social enterprise, which takes ex-felons and employs them in either construction or landscaping jobs. Not only does the organization employ these marginalized men, but it also provides them with mentorship and guidance to help them re-adjust to life outside of prison. Men who have a steady income and a sense of community are less likely to engage in behaviors that would lead to re-incarceration, and are willing and able to become productive members of their communities. This concept has been proven again and again by 2S Industries over the relatively brief time the organization has been in existence. The organization has taken a serious social problem, and has found an innovative private solution.

End of the Year Holiday Party and Toy Drive – Austin, December 4
Today, the Austin chapter hosts their final event of the year! As an AFF community, members will kick off the holiday season with ugly sweaters and celebrate an incredible year of camaraderie and policy discussions. The chapter partnered with a local charity so members may donate gifts to children who would not otherwise have something special during this season.

Holiday Party – San Francisco, December 5
Tomorrow, the San Francisco chapter has their final annual event to ring in the joyful holiday season! Members can enjoy drinks and hors d’oeuvres over conversation and fun games at a local arcade bar venue. In case you missed it, San Francisco chapter leader, Katie Modesitt, touched the AFF community’s heart with her blog post on ways to help California residents from the devastating wildfires. Please consider donating, as every little bit helps the relief effort.

The holiday season is here, and if you, are someone you know, may be interested in attending these or other upcoming events, check out AFF’s Facebook page! Want to learn more about AFF or get involved as a member? Reach out to the team by contacting Leah Whetstone at [email protected].

Leah Whetstone serves as America’s Future Foundation’s Community Growth Manager. Outside of AFF, she runs a wardrobe consultation side hustle that aims to develop individuals’ personal style. She graduated from Hillsdale College with a Bachelor of Science in marketing and enjoys travel, workout classes, and helping others see the beauty of their unique style.