America’s Future Foundation is excited to introduce the second of five 2019 Buckley Award winners: Brooke Fallon. Brooke has made a significant impact in the effort to reduce burdensome occupational licensing requirements and improve the livelihoods of Americans across the country. Through her work at the Institute for Justice, she has taught activists, entrepreneurs, and property owners how to make their voices heard against the threat of government overreach.

Her nominator summarizes her impact best when he writes, “[Brooke] led occupational licensing reform initiatives across the country this past year, criss-crossing the states to develop authentic grassroots communities around removing barriers to work. Most notably, Brooke was a leader in New Jersey where cosmetology licenses for hair braiders were restructured to move from 1200 hours to 40 hours and all fines were waived.”

Celebrate with Brooke at the Annual Gala and Buckley Awards on Thursday, May 23, at 7:00 pm at Nationals Park in Washington, DC. Purchase your tickets here.

Because of her successful leadership to remove barriers to honest work and protect individual liberty, Brooke has earned an award for “leading a significant grassroots initiative.”

Get to know Brooke!

My family didn’t have a lot of money growing up, so I learned the importance of working hard and being entrepreneurial from a young age. Later, I attended a college that was very expensive, and I wasn’t sure I’d be able to afford to stay and graduate. I worked several jobs between classes and had to be careful with every penny I spent. But I learned to be resourceful and to keep my eyes on my end goal, even when the present wasn’t looking too bright.

Those lessons have really helped me as I’m working on big legislative fights that can take years to accomplish. I’ve also learned to improvise and always make the most of what I have. This is a crucial skill in grassroots organizing, as you’re often faced with unexpected challenges, like a blizzard the day of your press conference or a bill sponsor who gets arrested (true story!). There’s never a dull moment. 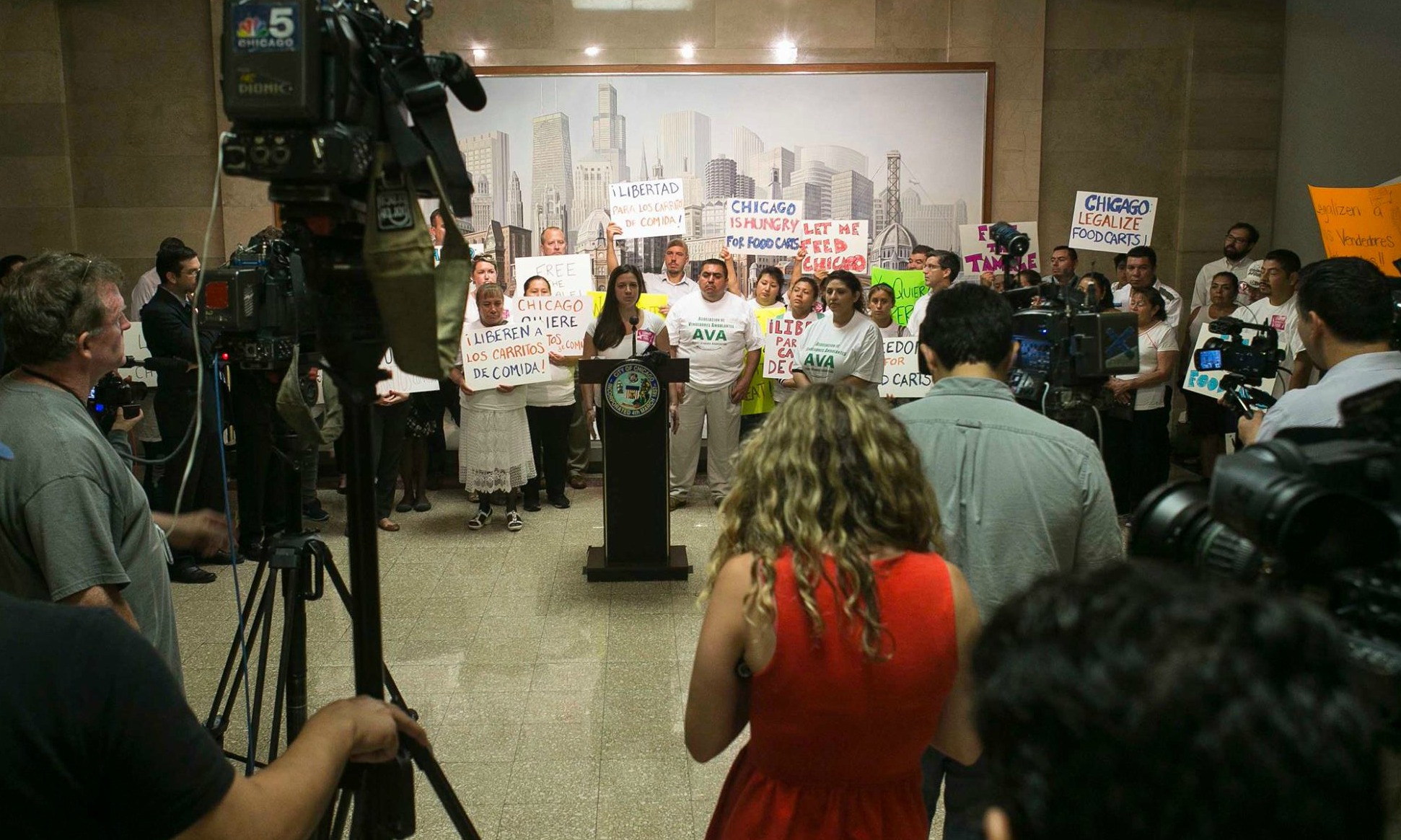 Starting out, overcoming your youth can be a challenge. I remember walking into rooms full of people twice my age and trying to convince them I was there to help them save their homes or businesses. Some people assume you’re naïve for wanting to take on city hall and powerful special interests. Sometimes, I was tempted to agree with them, but I learned that by showing up and following through, people figure out that you’re the real deal. Plus, young people bring an energy and a fresh perspective that can be so important in a long fight. To those of you just starting out, own that!

I will always treasure the first time I was part of changing a law. In Chicago, it was illegal to sell food from food carts, and street vendors across the city were being ticketed, harassed, and even arrested. After years of organizing, we were able to get a law passed to legalize these businesses.

Changing this law took an incredible amount of work and required doing many things outside of my comfort zone, like walking through the streets of Chicago in 90-degree weather in the summer, and two feet of snow in the winter, hosting trainings in people’s garages… and having to do it all in Spanish.

That experience gave me all the proof I needed that you can indeed fight city hall and sometimes, you can even win.

Entrepreneurs are some of the most amazing people to work with. They go out there every day, with the weight of the world on their shoulders. Will they be able to make payroll this month? Will they be able to support their family during slow seasons? Will they get hassled by an inspector who is having a bad day? Yet, in the face of all of that, they wake up early and do their thing. There is something so infuriating about watching them be punished for unnecessary and outdated laws that make no sense.

It’s been an honor to work with those street vendors and our other activists across the country who go out there and fight for their livelihood. They inspire me every day.

I’m not really one for political labels, but I believe that people need more freedom, not less.

The work we do at IJ transcends traditional political boundaries, which is part of why I love it so much. We’re able to build coalitions comprised of groups that normally would never work together. 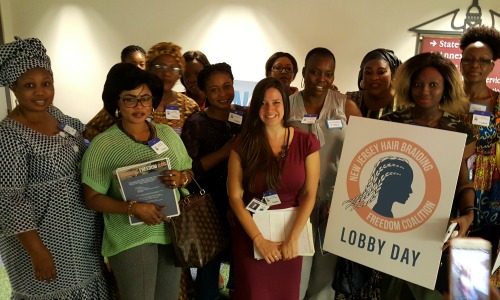 No two days are ever the same, which is just the way I like it.

Many days take place outside of the office entirely. We might be meeting with home bakers in Kentucky, or hosting a roundtable in Ward 8 in DC to talk to business owners about regulatory barriers that keep them from providing for their families, or meeting with a community devastated by eminent domain in Puerto Rico.

In the same day you could have to work on sending a strongly worded letter to a governor who won’t sign your licensing reform bill, writing an op-ed about excessive fines being levied against hair braiders, planning a rally, and consoling an elderly property owner who is afraid of losing everything to eminent domain. But it’s not all glamor. Sometimes we’re writing emails, making spreadsheets, and organizing catering. Food is a crucial ingredient in grassroots organizing!

I know a lot of people would say things like tribalism or divisiveness, but working on the local level has taught me that we’re much less divided than we think.

One thing I’ve been thinking about a lot recently, is that we’ve become so obsessed with rules as a society that I worry we’re starting to lose sight of our humanity. There are so many rules on the books that we enforce just because they’re there. I’ve had conversations with government officials about fines levied against business owners over rules that make no sense. But even when the official agrees with me, it’s their job to enforce that terrible rule.

We’re getting to a point where we’re criminalizing poverty, burying people in fines, and locking people in cages for breaking rules that shouldn’t have been there in the first place. It’s heartbreaking and it’s a major issue we must address as a nation. 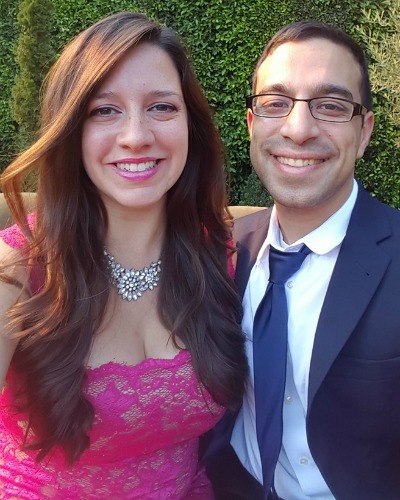 Our team is working on cutting red tape at the local level. We want to make it cheaper, faster, and simpler to start a business in every city by creating models for streamlining business licensing and removing outdated and unnecessary regulations.

Oh, and my fiancé and I are planning a wedding. That feels like a pretty big project. I hope to incorporate nods to our multicultural background—Iranian, Irish, Puerto Rican, and Mexican—so that both of our families feel included. Perhaps fesenjan tacos and Jameson piña coladas?

If I said anything other than Keeping Up with the Kardashians, my fiancé would call me out. Say what you will about the Kardashians, but those ladies are some of America’s most successful entrepreneurs.

Email or GChat or Slack?
GChat (though AIM will always hold a special place in my heart)

Brooke Fallon is the assistant director of activism at the Institute for Justice (IJ). Brooke teaches activists across the country how to fight for their rights to own property and earn an honest living. Through organizing, trainings, coalition building, and public outreach, Brooke helps entrepreneurs and property owners stand up and make their voices heard against the threat of government abuses of power.

Before joining IJ’s activism team Brooke worked in IJ’s Clinic on Entrepreneurship where she focused on knocking down barriers for low-income entrepreneurs in Chicago.

Check out our other 2019 Buckley Award winner Richard Lorenc, and three more to be announced soon!