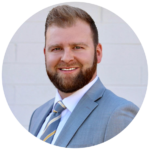 This week, AFF introduced our Regional Hubs, a new way for you to connect with other rising leaders in your community. We’re excited to introduce Austin Jack, the leader of our Southwest Hub. Austin launched the AFF-Phoenix chapter in 2019. He has managed fundraising and development efforts for non-profit organizations, large and small, as well as political campaigns throughout the Southwest region of the United States – all of this through his company, Jack Development Strategies, LLC where he serves as the president and CEO. Austin also serves as the chief development officer for the Goldwater Institute.

Get to know more about Austin!

1. What do you enjoy about your career path so far and why?
I have been fortunate enough to have the opportunity to work with so many non-profit and political organizations throughout the Valley as both a consultant and employee. My consulting firm has grown tremendously in the past several years and I am really looking forward to expanding the capabilities of my firm while managing the Goldwater Institute’s fundraising team simultaneously. What I love most about my path is I have been able to take many risks – both in business and as a professional. Having the opportunity to create new companies and non-profit organizations allows me to learn more about how bureaucratic government agencies behave when it comes to tax paying Arizonans attempting to earn an honest living. I graduated from Arizona State University in three years in order to pursue my career faster. I actually quit my 9-5 job the day of graduation to start my own firm, and today, that remains the best decision I have made in my career thus far. What I enjoy most in all of this is forging strong relationships with other think tanks, charities, and advocates for freedom who really believe in leading with principles both in life and in business.

2. How long have you been in Phoenix, and what brought you there?
My undergraduate degree brought me to Phoenix. I have lived here since 2012 when I enrolled in the School of Liberal Arts and Sciences at Arizona State University.

3. What has been your history with AFF?
I first heard about AFF- Chicago and met with the Chairman of their board for lunch who really inspired me to join this group of young professionals. After meeting more members of AFF, I knew I had to start a group in Phoenix to cultivate the next generation of leaders in the freedom movement. After serving as the AFF-Phoenix Chapter leader for the past twelve months, we have successfully created a grassroots coalition of nearly 200 individuals who care deeply about the defense of liberty in our state.

4. What helpful skills do you hold that people could ask you for advice about?

5. What are you most excited about in your HUB Director Role?
Empowering young people to be pioneers for positive change in America is one of the greatest opportunities one can ask for. And providing a platform for young leaders to profess their philosophical and political beliefs in an environment where cancel culture does not exist, is a clear need in our society today. This role allows me to do just that.

Working previously on a local level as a Chapter Leader in Phoenix, I recognized the power of community activism has on societal changes, and how entrepreneurs, public servants, and experts in public policy are capable of building a bridge with their networks to decide clear needs of the communities in which they serve – while allowing for peaceful debate during that process.

My kindergarten teacher constantly reminded me “there is no such thing as a stupid question.” Today, I believe many have forgot that the idea of asking questions remains just as important as it was decades ago when we were all in grade school. The influence of social media, fake news, and opinion polls have veered young leaders in a direction of consuming “gossip” and “rumors” as factual information. Becoming a HUB Director for America’s Future Foundation will grant the opportunity for people on all sides of the aisle to understand clear needs, and issues, in their individual communities, and allow me to work from a regional perspective to accomplish such goals.

My favorite quote in American history has always remained the same during my professional career – “freedom is but a generation away from extinction” said by one of our nation’s greatest Presidents, Ronald Reagan. This opportunity will create a front line defense to the indoctrination of leftist ideas and Marxist policies in the minds of 100s of young people. I have made it my mission to ensure young leaders, professionals, and individuals have an opportunity to speak their mind, but also the chance to better understand why we must protect the United States from any socialist regime and be certain that our viewpoints reinforce one common goal – to ensure freedom for every American citizen who believes strongly in the principles our nation was founded on. I view this opportunity as a chance to join the nationwide battle to combat socialism, put a stop to the indoctrination of Marxist ideas in young people, and push back at the self-interested agendas of our policy makers. Freedom is always worth fighting for.

8. Favorite places to travel?
Sedona, Arizona and Mykonos, Greece. Both are exceptionally beautiful.

1. Hiking Camelback Mountain
2. The Arizona Party Bike
3. Drinks at the downtown phoenix speakeasy “Bitter and Twisted”
4. Exploring the Papago Mountains
5. Tubing with friends down the Salt River – when its not too HOT!