Disinherited: How Washington Is Betraying America’s Young. Diana Furchtgott-Roth and Jared Meyer. Encounter Books, 2015. Review by Alex Verkhivker. Jared Meyer was featured on our So You Want to be a Policy Expert panel on May 22nd, 2015. 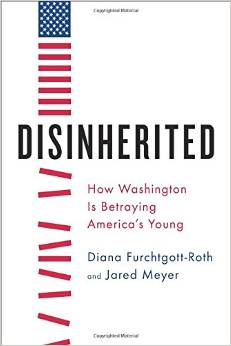 In their new book, Manhattan Institute economists Diana Furchtgott-Roth and Jared Meyer help elucidate the bleak economic climate faced by millennials. Much has been written about millennials in the popular press, but too little has been said about the root cause of their disadvantaged circumstances—poorly-devised government policies.

Disinherited: How Washington Is Betraying America’s Young lays out the problems that millennials are inheriting from their parents and grandparents. This empty inheritance includes broken entitlement programs, substandard education, labor market restrictions, and a healthcare system that forces the young to pay more in order to lower costs for middle-aged and older Americans.

Starting with entitlements, the authors note that millennials are stuck paying into Social Security and Medicare even though, if current trends continue, the programs’ promised benefits will not be there for their retirements.

Social Security benefits are currently paid to 58 million individuals. The program itself costs over $800 billion, but this does not show the complete, austere picture. When future promised spending on entitlements is compared to expected future tax obligations, the so-called “fiscal gap” is over $205 trillion.

Already, Social Security and Medicare account for almost 40 percent of federal spending. The unsustainable path of these programs means that the combined employer- employee payroll tax rate is projected to climb to 32 percent in 2050 from 15 percent today. Efforts to reform such entitlement programs, known as the “third rail” of American politics, need to gain more traction in Washington, and Furchtgott-Roth and Meyer provide convincing reasons why.

At least there is a growing realization of just how dire the situation has become. Nearly 8 in 10 Americans agree that the national debt should be one of Washington’s top three priorities, and 73 percent of millennials favor allowing individuals to divert their Social Security payments to private accounts.

One of the book’s strongest points is that the betrayal of America’s young continues as they begin elementary school. With ill-qualified teachers protected by powerful teachers’, there is tremendous harm placed upon young students who would greatly benefit from higher-quality educators. Research has shown that replacing a teaching in the bottom 5 percent with an average teacher, both rated according to quality, leads to about $250,000 in increased lifetime earnings for a single classroom.

Just 38 percent of high school seniors are proficient in reading and only 39 percent are proficient in math, even though America spends more on primary and secondary education per student than any other country in the world ($13,000). Promising education innovations spurred on through charter schools and voucher programs are not being embraced quickly enough. For those skeptical of the previous claim, see the authors’ discussion of Success Academy in New York City, or of Arizona’s education savings accounts.

Another resounding message from the book is that the Affordable Care Act is making America’s young pay more to cover the healthcare costs of older individuals, who often have much larger incomes. The legalese of the ACA prevents insurance companies from charging older individuals more than three times that of younger individuals, even though Americans under 30 only spend an average of $600 a year on healthcare. Because of this, in 2014 alone, 27-year-old males witnessed their premiums rise by an average of 91 percent. In comparison, 64-year-olds saw their premiums rise by 32 percent.

Furchtgott-Roth and Meyer help bring a unique perspective (government is not the savior) to the already widely-discussed millennial population. From birth, Millennials inherit a massive burden, most visibly from America’s $18 trillion federal debt and $5 trillion state debt, from the privileged generations before them. This betrayal continues as young Americas make their way through the education system, and it follows them into the labor market as they try to build their careers.

There do remain instances where the Disinherited authors would benefit from a stronger consideration their opponents’ views. Furchtgott-Roth and Meyer argue that the steadily-increasing rules and regulations the federal government imposes on small businesses are hurting America’s young through decreased economic growth and career opportunities. But the authors do not give much voice to scholars who cite regulations that are verified by cost-benefit analyses. These regulations often result in saved lives, particularly regulation pertaining to the promulgation of clean air and water. For instance, many economists argue that the benefits of environmental regulation—improved health, increased residential values, and reduced infant mortality—far outweigh their costs. In some cases, the marginal benefit of regulation, particular for health, can outweigh the marginal cost.

In 1995, economist Michael Porter suggested that government regulation could lead to heightened productivity as a result of increased innovation. Recent economic research has validated the Porter Hypothesis, showing that productivity at refineries can actually increase from carbon monoxide regulation.

Though Furchtgott-Roth and Meyer leave out Porter’s research, they cover a massive amount of ground in their concise book. They weave in both academic research and government data to make a strong case for reformulating current policy to better help America’s young.

The one drawback is the lack of citations given to their opposition, though their topic, helping young people to succeed, is not a partisan issue. Nevertheless, the book does read like a captivating investigative report, going data point by data point in its revelation of the specific instances of how Washington is, indeed, betraying America’s young. The book’s findings are at times strikingly counterintuitive, with serious implications for politicians and bureaucrats in Washington as they develop future policies and rethink old ones. At least, as the authors conclude, “The future of America can be saved, but only if our government ceases its betrayal of youth.”

Previously, Alex Verkhivker worked as an economic researcher with the Federal Trade Commission in Washington, D.C. and as an Associate Economist at the Federal Reserve Bank of Chicago. He holds degrees from the University of Chicago and UCLA. You can follow him on Twitter here.