Join a fun community of liberty-minded young professionals in the Windy City!

AF-Chicago is a professional development network for individuals who believe in the power of personal liberty, entrepreneurship, and innovation–channeled through free markets–to promote positive social change.

AFF-Chicago events bring the “doers” of Chicago together to network, learn from each other, discuss key issues, and ultimately collaborate to improve themselves and the city as a whole. AF-Chicago hosts variety of events; previous events have included a happy hour with David Boaz of the CATO Institute and a panel on school choice and education reform in Illinois.

AF-Chicago: How storytelling can change the world (Virtual)

Join AF-Chicago and Wall Street Journal editorial board member Jason Riley for a film screening and conversation about his new film, Thomas Sowell: Common Sense in a Senseless World by...

In 1997, a Dallas woman named Isis Brantley was arrested for a crime that she had committed but had no idea was illegal: braiding hair without a license from the... 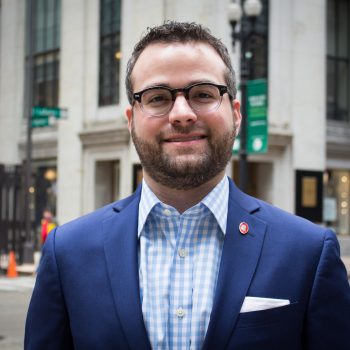 Eric Kohn is marketing manager at the Illinois Policy Institute. In that role, he works to facilitate conversation, increase engagement, and drive advocacy within the Institute’s digital community. Prior to joining the Institute, Eric was founder and CEO of Curious Task Strategies, a public affairs consulting firm. Eric is also a board member of the Institute to Reduce Spending. He previously hosted The Eric Kohn Program on 1530-AM WJJG, and has guest-hosted the nationally syndicated The Guy Benson Show and Illinois Watchdog Radio on Cities 92.9FM in Bloomington-Normal. He has appeared as a commentator on Extension 720 with Milt Rosenberg, The Michael Koolidge Show, WTTW’s Chicago Tonight, and numerous news broadcasts in the Chicagoland area. Eric’s writings have appeared in the Chicago Sun-Times, the Belleville News-Democrat, the Madison/St. Clair Record, and other publications. Eric grew up in Belleville, Ill., and is a graduate of Millikin University in Decatur, IL.