After more than a decade with America’s Future, Eric Kohn is onto his next adventure! We asked Eric a series of questions about his time with AF in Chicago.

1. How long have you been involved with America’s Future?

I attended my first event in 2008 and joined the board immediately after that event. I became vice-chairman of the Chicago chapter in 2009 and chairman in 2010. I’ve had an official role with the Chicago chapter ever since, with the exception of July 2014 to August 2016, when I was living outside of Chicago.

2. How did you first find out about America’s Future?

My introduction to AF was through Richard Lorenc, the current chair of AF’s board, who ran the Chicago chapter at the time. Richard and I were sharing office space and he invited me attend a panel discussion AFF-Chicago was hosting on the war on drugs. In the Q&A portion, I asked what I thought was a very clear and simple question to one of the panelists, who proceeded to evade answering it in any meaningful way. I expressed my frustration at this to Richard after the event was over, that the position advocated by this panelist was poorly served by his lackluster defense of it and evasiveness when questioned. Richard immediately invited me to join the board, saying that I’d be able to have a hand in picking topics and panelists for future events. And I’ve been involved with AF in one way, shape, or form ever since. 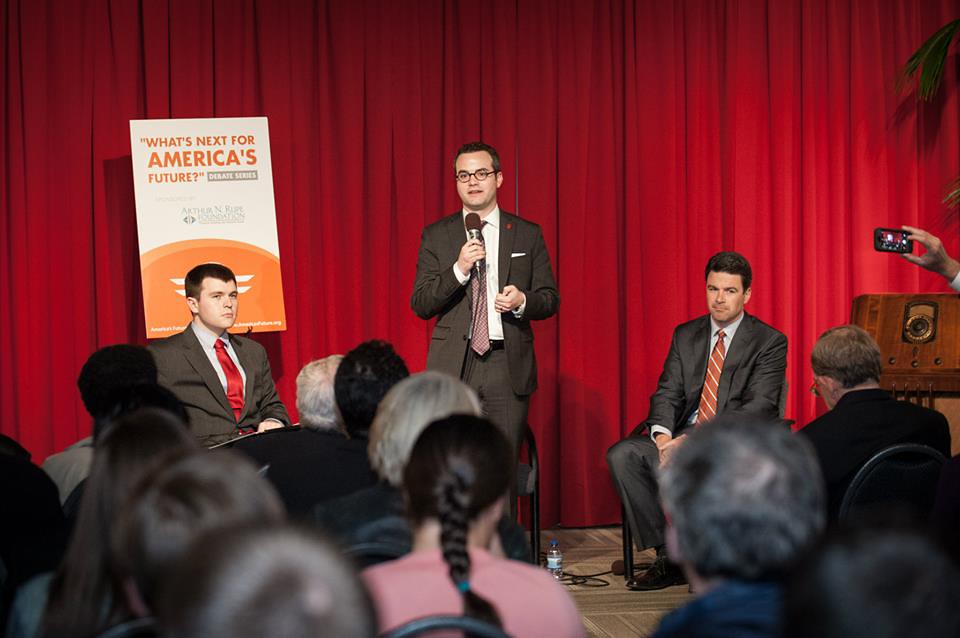 3. In all your time engaged with us, what was your favorite event you attended?

My favorite event was in 2013. I’d commissioned my good friend Danny Hynds to write a piece of music inspired by Robert Heinlein’s novel “The Moon is a Harsh Mistress.” We premiered this new work at an event at the Museum of Broadcast Communications, and followed it up with a discussion of the composition and the book. It was an example of doing, rather than just talking about something. Rather than just talking about great art that is consonant with our values, we made a piece of art that was.

4. What have you enjoyed the most about being AF-Chicago chapter leader?

I’ve loved providing a forum where people can discuss important ideas and subjects in a constructive way. My goal for events has always been to make people better communicators of the ideas that they believe in, so that when these issues come up at the literal or proverbial water cooler at work, they’re as prepared as possible to tell people what they believe and why. I hope, through exploring important and timely topics with knowledgeable guests, we were able to leave people better informed and empowered to share what they know with others.

5. What is your favorite AF memory?

We hosted a book event with Jonah Goldberg in 2008, shortly after its publication. It just so happened that the event was the day after William F. Buckley, Jr. passed away. The book talk itself was great (and it’s a great book!) but I’ll always remember getting to hear a short eulogy for one of my intellectual heroes from someone who knew him.

6. What advice do you have for young professionals who are looking to find a community?

Meet with real people in real life. A big chunk of my professional life has been centered around building digital communities. Digital communities are great, and the move of so much of our lives to the online space has allowed us to connect and communicate with people we otherwise wouldn’t have the opportunity to. But digital communities are not real communities. They have their place and their role, but there’s no substitute for the feeling of meeting together in the same place with people. If the global pandemic that we just lived through that put us more frequently behind computer screens on Zoom calls than in the real-life company of others didn’t drive home the importance of this kind of human community, I don’t know what will.

7. What are you looking forward to next in your professional life?

Chicago has been a huge part of my life. I moved there two days after graduating college. I met my wife there, and our children were born there. I’ll always love Chicago. But I’m excited for the opportunity for a new adventure with the Acton Institute in Grand Rapids. After spending the first 18 months of this job working from 200 miles away from my office and colleagues and spending most of my time on Zoom calls, I’m looking forward to joining and building that real, in-person community in West Michigan.

This is Eric’s current bio:

Eric Kohn is director of communications at the Acton Institute. In that role, he works to bring Acton’s vision of a free and virtuous society characterized by individual liberty and sustained by religious principles to a wider audience.

Prior to joining Acton, Eric was director of community management at the Illinois Policy Institute, one of the nation’s premier state-based think tanks. He was also the founder and CEO of Curious Task Strategies, a public affairs consulting firm. Eric was the leader of the Chicago chapter of America’s Future, an organization dedicated to developing the next generation of classical liberal leaders in Chicago.

From 2019 to 2021, Eric co-hosted Sources with Knowledge along with Joe Kaiser on News/Talk 560 The Answer in Chicago. He previously hosted The Eric Kohn Program on 1530-AM WJJG, and has guest-hosted the nationally syndicated The Guy Benson Show, Illinois Watchdog Radio on Cities 92.9FM in Bloomington-Normal, and Chicago’s Morning Answer on News/Talk 560 The Answer. He has appeared as a guest host and commentator on Beyond the Beltway with Bruce DuMont, Extension 720 with Milt Rosenberg, The Michael Koolidge Show, WTTW’s Chicago Tonight, and numerous news broadcasts in the Chicagoland area. Eric’s writings have appeared in the Chicago Sun-Times, the Belleville News-Democrat and other publications.