In case you haven’t noticed, cable news is a disaster. I don’t know if it’s the 24/7 nature of this news-entertainment fusion, or the market forces that seem to reward extremity and punish nuance, but we all know something isn’t working. We live in the wreckage created by our toxic media environment every day and we feel its effects on our lives and relationships like a bruise that just won’t heal. In the face of this problem, alternatives have risen up to offer something else. YouTube talk, podcasts, Substack newsletters and Patreon driven creative projects that inform, enlighten, entertain and moderate our discourse have been a saving grace for people cut out of the mainstream media dynamic. It’s funny (not really) that we call the mainstream media “mainstream” when they speak to and serve so few people in reality. 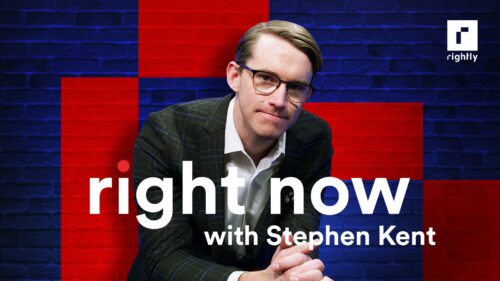 So what’s missing? I just launched a new show on YouTube called “Right Now with Stephen Kent” It’s a weekly interview and talk show tackling conservative and libertarian politics and it’s hosted by a new platform called Rightly. This is an endeavor from Al Jazeera International, a project they’ve described as aiming to uplift voices on the right not being captured in the media today. This holds up. What I think is missing and what made me want to do this show, was a huge desire to showcase the unsung players and range of perspectives on the right. I’m sorry but if you have a few libertarian bones in your  body, seriously embraced the Tea Party mindset in 2009, or believe in limited government and restraint….that’s not easy to find on TV. Cable news is culture war after culture with populism sprinkled throughout. Frankly, YouTube isn’t much better. The culture war stuff there is turned up even louder.

I believe there’s a hunger for less visceral conversation. Less demonization and sensationalism. Less end of days kind of discourse where any attempt at moderation, patience, calm — is treated as weakness. I get the impression YouTube, just like cable news giants prioritize the opposite, but it’s worth a shot.

This is why people love Joe Rogan so much. It’s explorational talk. No agenda, just discovery. Sometimes things get really weird. Sometimes you learn something. Sometimes you don’t. But you at least spend some time with familiar faces who you think of as friends nevertheless, so it’s fine. Everything is fine.

“Right Now” is trying to be a few things. But most importantly, it is a platform for the next generation of conservative and libertarian voices to speak their minds. I want to introduce our audience to the dynamic thinkers I’ve met during my time around politics and policy. Then there are debates happening within the old Republican coalition that I think need to be aired for a broader audience. When David French and Sohrab Ahmari clashed over “drag queen story hour” I saw it as being one the seminal moments in relations between libertarians and conservatives in the post-Bush area. A moment that while kind of odd and niche, was actually critically important for understanding why we even use “libertarian-conservative” as a hyphenated descriptor of ideology in the first place. 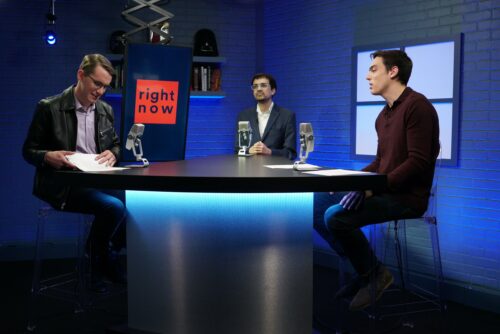 So I want Right Now to be a forum for those kinds of debates: like that of the conservative lash against Big Tech, or Mitt Romney’s Child Tax Credit proposal that would get the government off the sidelines of family welfare and working toward what some on the right now consider to be a “greater good” than government being cast as neutral.

My content rotation is a steady combination of podcasts from The Daily Wire, Reason, The Dispatch, National Review and a few doses of snappy YouTube commentary scattered throughout. What I hope to do is marry the best elements of those shows I enjoy and deliver the audience  a YouTube and podcast show that captures both the diversity of characters and thought on what’s often called “the right.” Ultimately we aim to help facilitate putting that groups’ best foot forward.

I’ve always dreamed of hosting a TV-style show, and now I’m doing it. It’d mean the world to me if you’d check it out, subscribe and tell me how we’re doing. We’re starting small and I’m eager for feedback on how we can improve the format, guest selections and the listening experience. So join us! Right Now with Stephen Kent airs on Thursdays on YouTube and in podcast feeds.

Our most recent episode is with Andrew Heaton of ReasonTV and The Political Orphanage Podcast joining to talk about how politics became America’s new national religion (episode below). My co-host is the great and always fun Shoshana Weissmann of the R Street Institute. After that, Brad Polumbo of FEE.org and I will be talking to YouTube commentator Gothix about how to beat cancel culture and rebuild a culture of courage.

Stephen Kent served as Young Voices’ Spokesperson and PR Manager from 2017-2021. He now is a standing consultant to the PR operation, handling media training and overseeing TV/radio booking for Young Voices’ network of contributors. He also serves as a consultant for District Media Group and is working on a book for Hachette’s Center Street imprint. Stephen is the host of the YouTube show “Right Now,” part of a new network called Rightly,