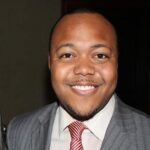 America’s Future Foundation is excited to welcome our new AFF-Detroit chapter leader, Brandon Brice! Brandon serves as a Director with the Boy Scouts of America’s Michigan Crossroads Council. Previously, he worked for the Office of former United States Speaker J. Dennis Hastert and with the National Urban League’s Economic Opportunity Institute, as well as the Director of Education and African American Affairs in the Office of the New Jersey Governor, Hon. Chris J. Christie. He later worked as Director of Resource Development with Veterans Empowerment Organization of Georgia, focusing on military families and homeless returning veterans. Brandon has given lectures at Princeton University, the Baltimore Harbor League, the National Black Law Students Association, the American Enterprise Institute, and the Hamilton Society in Washington, DC. He is a 2018 recipient of the Michigan Chronicle’s Distinguished Men of Excellence Award and the Spirit of Detroit Award in 2018. He is a proud member of Alpha Phi Alpha Fraternity, Inc., 100 Black Men of Greater Detroit, and Prince Hall Masonic Grand Lodge of Free and Accepted Masons. Brandon is also the President of the Board of Directors for Advantage Health Centers of Detroit. He holds a Bachelor’s in Business Administration from Howard University and a Master’s of Science from Rutgers University. As a Graduate student, he served as a fellow for the United Nations Foundation and the Heritage Foundation in Washington, DC. Brandon is currently earning his Master’s in Business Administration from the University of Detroit-Mercy and resides in the Lafayette Park neighborhood of Detroit, MI.

Get to know more about Brandon!

What do you enjoy about your career path so far and why?
I enjoy the mission of helping put American’s back to work through my workforce programs with the Boy Scouts of America. The best social program is still a ‘job,’ which means the more people we can prepare for the jobs of tomorrow, the stronger we can make this nation.

How long have you been in Detroit, and what brought you there?
I’m originally from Southwest Detroit, born and raised. I attended Howard University and Rutgers University and moved back to Detroit in 2015.

What has been your history with AFF?
America’s Future Foundation was introduced to me through an ad promoting the William Buckley Awards, who is one of my favorite fighters for civil liberties and an icon in the libertarian movement.

What helpful skills do you hold that people could ask you for advice about?
Fund development, fundraising, special events planning, networking and strategic communication.

What are you most excited about for the Chapter Leader role?
As Detroit’s new chapter leader, my vision is to promote and bring solutions locally to the issues that impact and effect the Motor City. My aim is to diversify our group, enhance our Advisory Board and create a synergy that is welcoming to non-traditional contacts that support the libertarian movement.

Book recommendations?
-48 Laws of Power
-Lord of the Flies
-Of Mice & Men
-No More Excuses
-Showdown
-Rules for Radicals
-The Politics of Inclusion
-Soprano State