A Time to Celebrate Veterans

This month we celebrated Veterans Day, a tradition that began to always remember the Armistice of World War I when on the 11th hour of the 11th Day of the 11th Month there was peace again in Europe. Interestingly, it is also the Feast of St. Martin of Tours, a Roman soldier who converted to Christianity after he cut his cloak in half to share with a naked beggar who then revealed himself to be Christ in dream. He is a Patron Saint of Soldiers, for example the U.S. Quartermaster Corps has a medal in his name called the Ancient Order of Saint Martin Award. To my Grandfather this was no coincidence. I honor his memory on this special day with a tribute to a great man who served our nation in World War II. He shaped me in profound ways and I think of his lessons and wisdom daily. On the subject of war I was schooled by a man who experienced it first hand. By the time I became aware of the concept of the non-aggression principle in college, the lightbulb went off on this important idea. Threat and physical violence or aggression against the person or property of someone else is wrong…hard stop.  Grandpa’s stories instilled how evil war is and how terrifying it is to civilians and those caught up in its conflict. While I continue to struggle with the non-aggression axiom regarding some policies, when it comes to war, I remember grandpa’s stories and it makes perfect sense. He would always say, “we can do better, we don’t have to kill anyone”.

Harold “Dutchman” Van Eck, was a Sergeant / Technician Fourth Grade United States Army. His active Service was from February 1943 – October 1945 in the 104th Infantry Division known as the “Timberwolf Division“ He served in the European Theater of World War II and specifically in the campaigns of Northern France, Rhineland, and Central Europe. Earning the European-African-Middle Eastern Service Medal, Good Conduct Medal, D-Day Medal, and Bronze Star. I was fortunate to have such a great role model and listen to the many narratives of his time serving our nation during World War II. Two of these stories I share below. It is the responsibility of Millenials and Gen Z to keep the accounts of the WWII generation as we are losing these individuals every day. It will soon be solely our charge to pass the chronicle along so their sacrifice and lessons may never be lost to history.

Harold departed for the War in Europe on the crowded RMS Queen Mary known as the “Gray Ghost”. Before he shipped off, his mother, my great-grandmother, who was a devout Catholic – instructed him to wear a small medal of Mary Immaculate known as the Miraculous Medal because of the wonders that have been attributed to it.  She said that the Blessed Mother would protect him, and that by wearing the medial he would have grace and heavenly comfort no matter the circumstances. In France, Harold credits his devotion to the Blessed Mother and wearing the Miraculous Medal over his heart on his uniform for his survival. It was his practice that before he would fire his rifle, he would lean over and kiss the medal, asking for Mary’s intercession and forgiveness to her Son Jesus Christ. During a fierce battle in Northern France he bowed his head to kiss the Miraculous Medal and bullets went past his head. This happened on two separate occasions and the soldiers behind him did not survive. We remember their sacrifice. After D-day he is back in England, during some down time he prays a Memorare, followed by the words etched on the Medal, “O Mary Conceived without sin, pray for us who have recourse to Thee” while contemplating the Immaculate conception, Universal Meditation of Graces, and Queenship of Mary.  Right after he finishes, a Lieutenant approaches him asking that he type up a letter drafted for command in Washington D.C. He quickly reads it and says, “I can’t type this letter”. Taken back and insulted by the response the Lieutenant asks, “why”? Harold says, “You have run on fragmented sentences, dangling modifiers, double negatives, and verb tense errors. You can’t send this to Washington, it’s a disgrace!” At that moment, General Terry de la Mesa Allen Sr. is walking by and overhears this rebelliousness from a soldier to a senior officer. He grabs the letter, skimming it over, then turns to Harold and says, “Re-write and give it back to me, you have 3 minutes.” Successful at this task, General Allen is so impressed he appoints him as his personal stenographer and said, “no letter goes to Washington unless Harold sees it”. Grandpa was thrilled to turn his rifle in for a typewriter. He contributed greatly to the war effort with this new weapon. Grandpa did not have a doubt in his mind that this event was divine intervention. He was certain his luck had run out and he would not survive combat if he had gone back to the front lines again. For this reason, he names his 2nd son Allen in honor of the General that pulled him out of harm’s way for the remainder of the war.

Harold returned home to Lodi, NJ to his new wife Florence. They wed in 1944 during a requested leave. My grandparents were happily married for 76 years. He took advantage of the new Servicemen’s Readjustment Act of 1944 or GI Bill and attended Rutgers University and was the first in his family to earn a master’s degree!  He had a good career working at Westinghouse in Newark, NJ until retirement in his 70s. Grandpa raised 7 children, had many grandchildren, great-grandchildren, and extended family that were the center of his life. He was a great example of active community leadership. Serving in roles in the VFW, American Legion, Knights of Columbus, and his local Catholic Parish. Harold was a regular caller to CSPAN, and editorial writer to the local paper. He welcomed discussion and debate on every issue. Grandpa taught the importance of conviction for your beliefs, reason, and logic. A man of deep faith, he inspired countless people, was witness to true miracles, and spent much of his day in fervent prayer for the intentions of others’ needs. His nickname in his parish was “Harold be thy name”!

Thank you to all our Veterans for your service to our great country. In no small measure, your sacrifice is why the privilege still exists to belong in organizations like AF and the right to freely share thoughts and reflections such as these about one’s family history prevails. 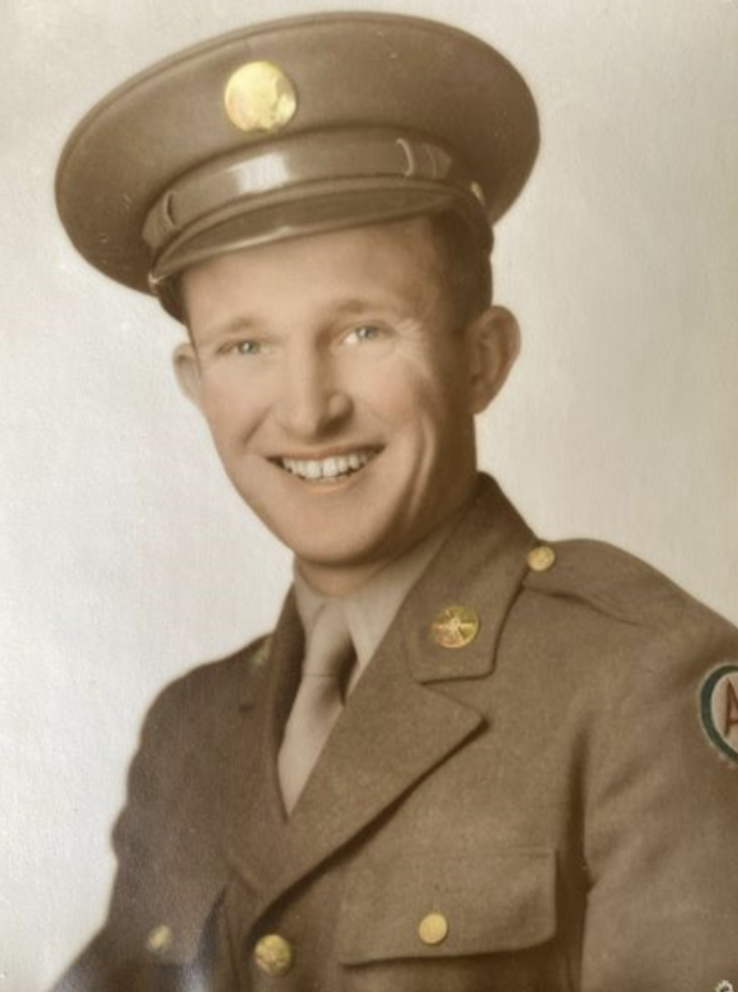 Grant Alexander Van Eck grew up in New Jersey, where he was active in the liberty movement since his youth. Grant took on leadership roles for liberty at Rutgers University. After moving to Rhode Island, he has worked diligently to build the liberty movement in the Ocean State volunteering for the Rhode Island Center for Freedom & Prosperity. Active in his church, Grant is a Lector and Extraordinary Minister of Holy Communion and serves as Deputy Grand Knight in his Knights of Columbus Council. He is an Eagle Scout. Grant is a movie buff and his hobbies include hiking, home brewing and shooting sports. Grant states, “AF is the right organization to bring individuals in RI together who believe in the constitution, free-markets, property rights, and liberty. RI’s AF chapter is fun. We are a place where motivated young professionals who understand or want to learn about freedom gather to grow their business, network, share ideas and support their fellow patriots.”